Poisonous Cane Toads (Bufo Toads) are an invasive species found in southeastern United States. A dog who licks, bites or eats one of these poisonous toads may be in life threatening danger. You need to contact the vet immediately.

Instead of boarding our Wirehaired Pointing Griffon at a local dog daycare we decided to take her along with us on our vacation to south Florida. We thought the long car ride with our Griff would be the toughest part of our trip. As it turns out that was the easy part. After a late night 2-hour emergency visit to the vet along with a $159 bill, I became highly educated on the dangers of the Cane Toad. Here is what happened…

Our trouble started with a late night jog around the neighborhood after a long stressful car ride from Indiana to southwest Florida. After starting some laps late at night I noticed what I thought were rather large frogs hopping across the street. I didn’t think anything of it, as my Griff had never come across anything remotely dangerous back home.

We were in for a surprise as she darted across the street pouncing on one of the giant toads. She picked it up in her mouth and immediately flung it to the side. We tried to resume our jog, but quickly stopped as she began violently flapping her ears and shaking her head. Then came the drool – her mouth began to foam as saliva began hitting the ground. After seeing this behavior I immediately knew something was wrong.

My mind began racing – what just happened, I thought to myself. Soon I put the pieces together – that oversized toad must have did this. I quickly ran back to the spot where I last saw it and there it was sprawled out in the grass. I quickly got out my camera (see picture above) and began searching google on my phone for any vet still open this late at night. It was 9:30 ET, well past normal business hours.

After a brief conversation with the front desk at the vets office my worst fears were realized. The vet suspected it was an encounter with the poisonous Cane Toad. We were given warning signs, symptoms, identification and a plan of action.

As I mentioned above, my dog started foaming at the mouth and shaking her head. She stopped playing and became lethargic. Her entire attitude and disposition changed in just a few seconds, so I knew something was wrong. Since I was with her when she picked up the Cane Toad in her mouth, I was able to take a picture of the creature. If you come home to a pet acting sickly here are some tell tale signs of a toad poisoning. The signs are classified by moderate or full poisoning.

If your dog has picked up the toad in its mouth or licked its back it has likely received a moderate amount of poison. Here is what you can expect as your dog deals with the poison.

The initial symptoms always start out with drooling and foaming at the mouth. From their the poison makes them stumble around. Next comes vomiting and bright red gums, as the venom irritates the skin along the gum line and throat. In severe cases where the dog has ingested a lot of poison seizures, rapid heart rate and difficulty breathing are common.

First Aid – Do This Immediately!

Call the vet immediately. While you are waiting to speak with someone on the phone here are some things you can do.

Usually your dog will drop or spit out the Cane toad, but if your dog has consumed a Cane Toad take it to the vet immediately! Cane Toads can kill in as little as 15 minutes.

A dog that picked up or licked a Cane Toad will only receive a little poison, while a dog that consume an entire toad will receive the toads full amount of venom. 95% of poisonings fall into the moderate category where your pet quickly spits out the toad and receives only a small dose of venom.

Our closest vet was 20 minutes away, so after wiping the remaining poison out of my dogs mouth I began driving. After arriving I immediately informed the front desk that the situation was urgent. My dog was taken to a room where they did an additional  flushing using water and rubber gloves.

After that they hooked her up to several machines. They performed an electrocardiogram (ECG) to make sure her heart rate was under control. Finally they monitored her breathing and had several machines available if she began having any difficulty.

After about 90 minutes she was released back to me to go home. The total bill was $159.00, but i thought this was fair given the late emergency hours. Intensive care could have easily ran the bill above $1000.00 and I didn’t have vet insurance for my dog. They also provided important education for future encounters. The staff at the vet said the Bufo Toad is a huge problem in the area and they receive calls and visits on a weekly basis.

The adverse effects of a toad poisoning usually last between 60-90 minutes, although your dog may not feel 100% for up to a full day. It took me 30 minutes from the initial poisoning to get my dog to the vet. This included 10 minutes spent cleaning the poison out of her mouth and 20 minutes of drive time.

The scientific name for these toads is Bufo Marinus but they are more commonly known as Cane Toads, Bufo Toads, Marine Toads and Giant Toads. The toad is extremely large with adults measuring 4″ wide and 9″ long. They are bigger than an adults outstretched hand. They can be found in parts of south Texas, but are most commonly encountered in south Florida during the wet rainy season. These toads are native to South America, possibly French Guyana.

They are most active in late evening after heavy rains around the edge of buildings and roads. During this time they are looking to feed and reproduce. For the most part they are nocturnal, but also re-hydrate during the day in damp environments. They were originally released in the early 1930’s to control pests in the sugar cane fields, but soon overpopulated and are now considered an invasive species.

These toads can multiply rapidly due to the long lifespan and aggressive reproduction cycle. A single female will lay over 35,000 eggs in one year – usually near standing water canals, ponds, streams and ditches. They live on large insects like beetles and roaches, but will also consume small animals.

They have no natural predators outside of humans and rely on the poisonous glands on their back for defense should anything decide to test them. This has allowed populations to swell out of control.

The toads are about the size of an adults outstretched hand. They are often 4 inches wide and 6 inches long, hence the name “Giant Toad”. Unlike other toads that may try to hop away quickly, these toads usually sit still relying on their poisonous defense vs speed. Coloring varies but is usually brown, tan, grey , black and sometimes yellowish.

Females are noticeably larger than males and appear darker in color. Males are smaller and have more of a yellowish coloring. Sometimes Southern Toads get mistaken for their poisonous cousins. The most distinct difference is the pair of crests on the head and glands on the shoulders.

How Deadly is the Poison?

Cane Toad toxin is lethal – especially if your dog has consumed the toad. Most dogs will lick or pick up the toads in their mouth, immediately spitting them out after tasting the poison. In the rare case your dog has eaten the toad, don’t waste any time. Get in your car and get your dog to the vet immediately! They will need to induce vomiting or pump your dogs stomach. They can kill in less than 20 minutes.

A dog that has licked or picked up a toad in its mouth has only received a small amount of poison and will likely recover without the need for veterinary assistance. However, factors like weight and age play a role in recovery as well. Small dogs and old/young dogs may have a tough time dealing with the poison and may also need to visit the vet. Monitor your dog for the next several hours.

After excessive foaming at the mouth my dog began vomiting on the floor. She had several episodes about 5 minutes apart. At that point I noticed her gums were bright red and she was panting despite no physical activity. She was extremely slow walking and deciding it was better to lay down on the floor. At this point I picked her up and carted her to the vet.

How Does the Poison Work?

A cardiotoxin called Bufotoxin is released through glands on the Marine Toads back – along with vasodilatory chemicals that increase the dogs heart rate. Basically the toad releases toxins that speed up the heart rate, dilate the arteries and then stops the heart as the blood recirculates.

The poison has hallucinogenic properties as well. The strange thing is a dog that has picked up one of these toads in its mouth could do the same thing days later – almost like an addiction.

Always use a leash when walked your dog late at night – particularly after heavy rains. Don’t let your dog roam freely in the yard. If you must, use a flashlight to scan the yard for toads hopping around. Late spring and summer are the most common times of the year to find Cane Toads.

Pickup any food or water bowls that have been left outside. Cane toads may try to drink the water or eat the insects around the food bowl.

What should I do if I find a Cane Toad?

As an invasive species Bufo Toads are unwanted. You should strongly consider euthanizing these deadly toads should you encounter one. Use gloves (rubber) and wear glasses before picking one up. Dispose of the dead toads in a clear plastic bag. Bufo Toads are poisonous even after death so its important that they are properly removed. Relocating these toads isn’t the best solution either as they are territorial and will return to the original area if only relocated a short distance away. 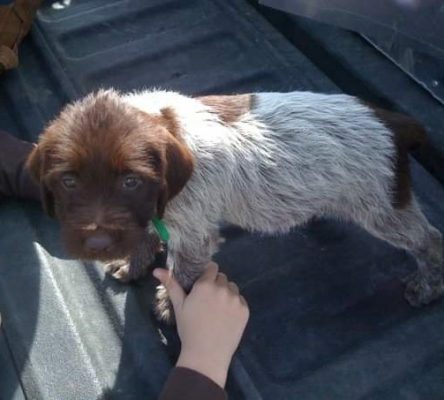 My wife and I got married back in 2009. Instead of going on a fancy honeymoon to a tropical destination we did the next best thing…bought a Wirehaired Pointing Griffon puppy and named her “Wubbie”.

Over the years I have learned a lot and I’d like to share my experience and knowledge of this amazing dog hunting breed with you.